Winter Sowing Seeds in milk jugs is a great way to start vegetables, and flowers in the middle of winter. Of all the seed starting methods, this is one of the easiest and most budget friendly. For us gardeners, the middle of winter is without a doubt the toughest part of the year. Luckily, I’m an optimist and I can tell you there’s a plus side to the calendar flipping the page to January. It means it’s time to start Winter Sowing in Milk Jugs!

What Is Winter Sowing?

Winter sowing is a very simple concept. You plant seeds in the winter and rely on mother nature to do the rest. When the weather warms in the spring, soil temps will increase and your seeds take the cue from nature that it’s time to germinate.

There are a couple of different Winter Sowing techniques, but by far the most common, and most effective is to sow seeds in some kind of plastic container and set the container outside. Milk jugs and water jugs are most commonly used.

Anyone that’s ever tried other methods of seed starting such as Starting Seeds Indoors has probably realized at some point there are problems that come up: Seedlings flopping over, damping off disease, and fungus gnats can all make starting seeds indoors difficult. But winter sowing in milk jugs avoids a lot of these problems and instead has many benefits:

1. Natural Cold Treatment-  A lot of seeds need to go through a period of cold stratification, or vernalization, in order to germinate, or flower successfully.

If starting seeds indoors you may have to keep seeds in your refrigerator for several months to give the seeds the correct cold treatment. With winter sowing in milk jugs, seeds naturally get that cold treatment by being left out during the winter.

2. No Hardening Off- For those that have started seeds indoors, or in greenhouses, you are probably aware that hardening off seedlings is a huge pain! Winter sowing in milk jugs eliminates the need to harden off seedlings.

3. Overall Less Labor- With winter sowing in milk jugs there’s so much less labor than other seed starting methods. No worrying about filling trays with water. No setting up lights, fans, or shelves. No bringing seedlings inside during the night and back out during the day.  Overall, it’s much less labor.

4. More Space Outside- For most of us, space is more limited inside, than outside our homes. Finding a designated area to start seeds indoors can be challenging.

6. Stronger Plants- Seedlings grown indoors can be leggy as they tend to stretch towards the light. There’s no replacement for sunlight. Seedlings will be stronger, thicker, and overall healthier if grown in real sunlight vs an artificial setup.

When to Winter Sow

When it comes to timing, generally speaking, seeds fall into 1 of 2 groups. Group 1 seeds include cold hardy perennials and annuals that need a long cold period before germinating. Group 2 seeds include tender annuals, flowers, and vegetables that do not require a cold period for germination. Group 1 seeds should be sown in early winter (January and February), and group 2 seeds should be sown in late winter (March and April). Always choose seeds that are in your hardiness zone, and check out the seed packet for information on the ideal stratification period, if any, for that particular seed. This will help you know when to sow your seeds. If this information isn’t listed then do a simple internet search for information on how long the stratification period should be.

There are so many different types of annuals, perennials, and vegetables that are great candidates for winter sowing, but here’s a quick list of some popular ones:

Group 2 (Requires Little to No Periods of Cold Stratification, (Start in March-April)

How to Winter Sow In Milk Jugs

1. Choose Material- Technically any kind of plastic container will work. Personally, my favorite is milk jugs.  Most milk jugs are translucent and let in the perfect amount of light.

If you use very clear plastic, you run the risk of too much heat and humidity inside your container. This usually isn’t a problem in cooler climates, but for those in milder climates you could get some warmer, sunny days in winter or early spring. This can create large temperature fluctuations between the day and night. Seeds run the risk of germinating prematurely and dying with freezing night temps.

Most milk jugs on the other hand will let just the right amount of light in. This will prevent conditions from getting too hot and humid during a stretch of warm, sunny weather, and seeds will remain dormant.

2. Prepare Milk Jugs- The first thing you can do is throw away the cap. The milk jugs will be left outside with no cap on.

Next, cut several drainage holes in the very bottom. You can use a utility knife, or a Philips head screw driver to make the holes. To make it even easier heat the end of the screwdriver on the stove top or with a lighter. 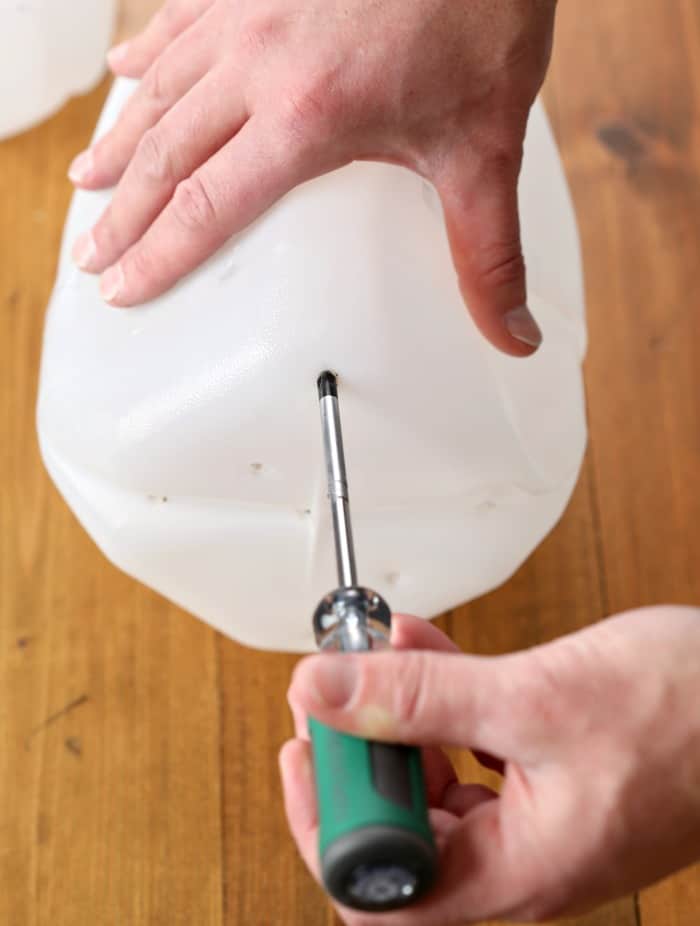 Next, use a sharp knife to cut around the milk jug, about 4” from the bottom (just below the bottom of the handle). Go almost completely around, but leave about an inch uncut so the milk jug stays connected. This inch will act as a hinge and will let you open and close the milk jug. I usually leave this hinge in the corner where the handle is, see below.

3. Use Potting Mix, Not Soil- Make sure you purchase potting mix, not potting soil! Also stay away from seed starting mixes, or anything with a lot of peat moss.

You want a potting mix that has great drainage. Potting mixes should be soilless and contain perlite and/or vermiculite as well as shredded bark, peat, and maybe some other fillers. I usually have great results with Miracle Grow Potting Mix.

Place the potting mix in the bottom section of the milk jug.  Add enough so it’s at least 3” thick. Don’t be afraid to work through the potting mix a bit to break up any clumps. 4. Purchase Seeds- Winter Sowing works for germinating lots of different perennials, annuals, and vegetables, but it’s greatest benefits are seen with plants that prefer a period of cold stratification. You should see words on the seed packet or in the description like ‘cold stratification’, or ‘cold treatment period’. Another common word is ‘Vernilzation’. This is telling you that the seeds do best if subjected to really cold temps for several days, weeks, or months, before sowing.

I love getting as much detail as possible about the seeds I’m growing. That’s why I highly recommend buying from a company like Park Seed. They will send you a catalogue (or online catalogue) with detailed info and will give advice on the best sowing methods for each seed packet.

Just be careful not to get too overwhelmed with all the information and horticultural terminology. Don’t be afraid to experiment either, seeds are relatively inexpensive.

Some of my personal favorite plants that I’ve successfully grown from this winter sowing method are:

5. Sow Seeds- Place your seeds in the soil, or on top of the soil, according to the packet. Some seeds require light to germinate, which means they shouldn’t be covered by the potting mix. Most germinate without light, those should be sunk in the potting mix a bit. For larger seeds, I usually sow 9 seeds per milk jug. For smaller seeds, 12-16, and for really small seeds I just do my best to sprinkle them on top of the potting mix as evenly as possible. If I have a crazy amount of germination from over seeding I simply thin out the weaker seedlings in the spring. To thin plants, use small scissors or pruners to clip the seedling. The seedling will eventually die back. Don’t pull on the seedling, this could disrupt the root system of the seedlings you’re trying to keep.

6. Labeling- Don’t forget to label each milk jug! You’d be surprised how easy it is to forget what seeds you sowed. To keep things simple I like to use one milk jug per seed variety. Things can get confusing when mixing different seed varieties in the same milk jug. In addition to writing the seed variety on the milk jug, I also stick a plant label inside the milk jug. Here’s a link to my favorite plant labels as well as my go to labeling pen (amazon affiliate) :

7. Water and Tape Shut- Very carefully, water your newly sowed seeds. I recommend using a spray bottle to gently soak the first inch or two of potting mix. Using a watering can could be too strong for this initial watering and it could disrupt the seeds. Watering at this point is just for creating good seed to soil contact. 8. Set outside- Once your seeds are sowed, watered, and labeled, it’s time to place outside. Place the milk jugs outside so they are exposed to the elements. Don’t leave them under an overhang. The point is to let rain, snow, and sun get into the milk jugs. If you’re in a warmer climate with stronger sun then try and seek out a place that isn’t in complete exposure to the sun.

9. Be Patient- At this point most of your work is done for awhile. This is the best part of winter sowing seeds. Mother nature is in charge from here on out.

There shouldn’t be any need to water your seeds unless you have had unseasonably dry, sunny weather. If this is the case then watering with your spray bottle can be beneficial. Don’t take the tape off, just shoot a couple of sprays into the top of the milk jug. That should be plenty of water to create a more humid, moist, atmosphere.

10. Open Milk Jugs- Once your seeds have germinated, remove the duct tape and open them up. At this point water them if the weather is dry. You want to keep the soil moist.

Continue to monitor the weather and temperature. For the most part once I open my milk jugs I leave them open. But if we are getting a cold night where temps are going to drop below freezing I’ll close the milk jugs over night. I’ll do the same if there are heavy winds, heavy rain, or hail forecasted. If there is a hard frost expected, I’ll actually close the the milk jugs and cover them with a blanket over night.

In the warmer regions be extra conscience of sunlight. Don’t let your little seedlings bake. Keep them watered and keep them in a location where they are out of direct sunlight in the middle of the day.

11. Transplant Seedlings- When seedlings have become established and have developed their true leaves, it’s time to transplant them.

Carefully, make several cuts along the bottom portion of the milk jug so you can carefully remove the clump of potting soil where the seedlings roots are.

Then, using your hands carefully pull apart each seedling. Be careful and keep the roots in tact. Also keep as much potting mix on the roots as possible. At this point you should be able to transplant your seedlings!

Best Perennials to Grow from Seed