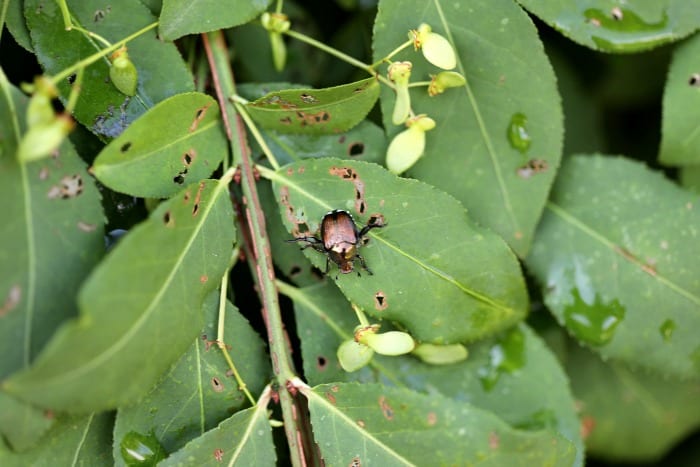 What Are Japanese Beetles?

Japanese Beetles are small beetles with a distinguishable green head. Originally from Japan, they were found in America in the early 1900’s.  Since then they have developed a terrible reputation as a destructive, invasive species that are one of the worst pests you can have in your landscape.

As if these adult beetles weren’t bad enough, they have an equally destructive larvae stage.

White grubs, are the larvae stage of the Japanese Beetle. For lawn enthusiasts, grubs can be a nightmare.  They feed on the lawns root system, ultimately killing sections of your lawn. Large infestations can cause so much damage that the lawn can’t be rescued without a serious renovation.

Japanese Beetles feed on the leaves, fruit, and flowers of hundreds of plant species. Their damage is easy to identify.  Since they feed primarily on the soft tissue parts of the leaves you will see leaves that look like ‘skeletons’, meaning only the veins of the leaves are left.  Check out this pic below of the damage left on this Burning Bush: 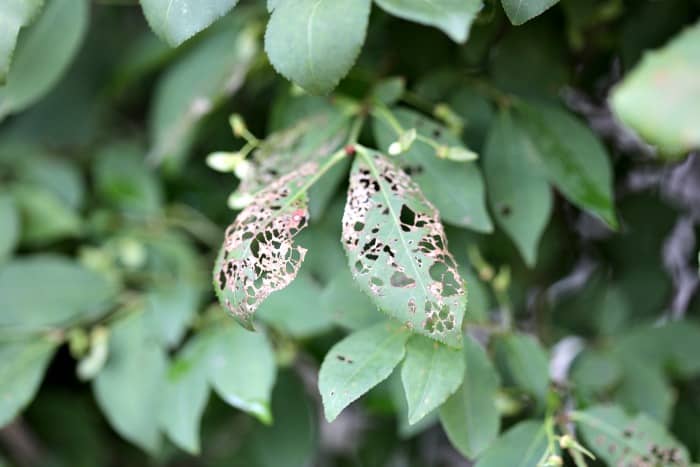 If ignored, damage can get so bad that it ultimately kills the plant.  At the very least, infested ornamental plants are unsightly, and vegetable and fruit plants may not produce a viable crop.

When Are Japanese Beetles Active

Japanese Beetles emerge from the soil in early summer and begin a constant cycle of feeding and mating over the next several weeks. After mating, the females go back into the soil for a couple of days to lay eggs. She’ll then emerge, feed on leaves and flowers, mate again, and go back to make another deposit of eggs into the soil. This cycle continues until she laid about 40-60 eggs total. Eventually, the adult beetles will die as temperatures begin to cool heading into fall.

The eggs that are laid in the soil hatch in mid summer. At this point the Japanese Beetle is in it’s immature larvae stage, known as a white grub. These grubs will feed heavily on your lawns roots so they get nice and fat before overwintering in your lawns soil. This is when your lawn can get severely damaged if you have a large infestation of grubs. To learn how to treat and prevent grub damage check out: White Grubs: Prevention and Treatment.

1. Manual Removal- Believe it or not, manually removing Japanese Beetles is the most effective way to control and prevent them from coming back. The method is simple… in early morning when beetles are most sluggish, simply pull them off foliage and collect them in small bucket of soapy water. The soapy water prevents them from flying out.

2. Azamax or Neem Oil- Both products contain the same active ingredient (Azadirachtin). The Azamax product is more concentrated, but Neem Oil is more accessible.  Neem Oil can be found in most big box stores and garden centers. Both products are approved for organic use.

It’s best to apply these products as a preventative (before beetles arrive), but can also be used shortly after the beetles are present.

3. Use Plants that Japanese Beetles Don’t Like- Catnip, garlic, chives, leeks, onions, marigold, tansy, and white geranium have all proven to repel Japanese Beetles. Using these plants in your garden and landscape will help protect surrounding plants.

It is safe to use on vegetables, fruits, herbs, and ornamental plants but it’s important to note that this product can be harmful to honeybees.

2. Sevin is a brand of garden insecticides that are one of the most effective ways to control Japanese Beetles. It is also the least selective and kills up to 500 different insects. If you have a serious beetle problem and the safer options haven’t worked then consider using Sevin products.  Sevin products come with different options for application such as hose end sprayer, bottle sprayer, or dust.

There’s a lot of controversy surrounding the effectiveness of Japanese Beetle traps. Many gardeners argue that the attractants used in these traps actually lure in beetles from far away.  They claim that while yes you will certainly trap a large number of beetles, it is likely they wouldn’t even be there to begin with if not for the traps.

But this claim isn’t entirely true. While it is true that Japanese Beetles are strong flyers that can travel several miles it is unlikely they will do so.  As long as there is a nearby feeding source they will not go very far.  In fact if your property has ornamental plants, flowers, or vegetables that beetles find desirable they will have no reason to leave.

However, if you live in a densely settled community with properties really close together, you could argue that Japanese Beetles are being lured to your traps from neighbors properties. That is why it’s best in these scenarios to team up with your neighbors so everyone in the properties surrounding each other have traps as well. The more property owners that participate the stronger the barrier will be and everyone will benefit.

Another caution when using Japanese Beetle traps is to make sure you place them in the correct spot!  When traps are placed next to ornamental plants, flowers, or vegetables, you’ll probably notice only some beetles get trapped while plenty others feed on the plants and bypass the trap.

In this case the reason the traps seem ineffective is because they are not in the correct place.  For traps to work, they need to be in a designated area of your yard, 30 feet away from plants or garden areas where beetles normally feed.

If the trap is placed close to a rose bush for example, the beetle will at first be attracted to the area because of the trap, but once it arrives it will choose the rose bush. If the trap is 30 feet away however, the beetle goes to the trap and has no other options for feeding.

Overall, traps are a great way to reduce damage from Japanese Beetles. They are even more effective if you team up with your neighbors and get them to have traps on their properties as well. This will create a larger range of coverage.

When to Cut Back Perennials