Moles can create a lot of damage to your lawn and landscape. Use these tips to identify, and get rid of moles in your yard before damage gets too severe. 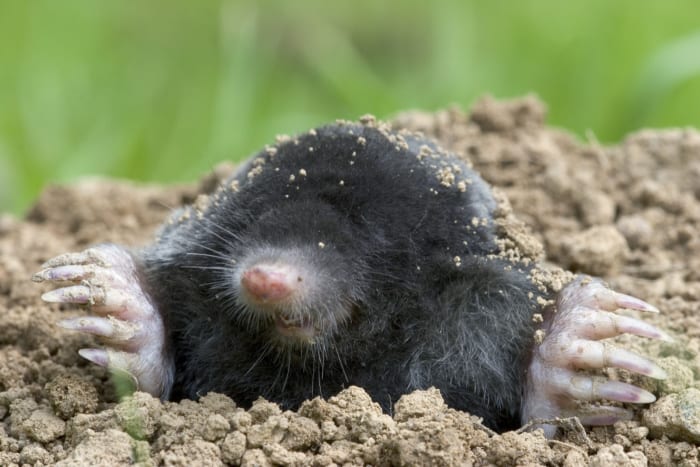 Moles can be one the most frustrating pests to control in your yard. These elusive creatures spend most of their time underground where they create a vast network of underground tunnels, mounds, and holes throughout your lawn and garden beds. Their digging can destroy lawn and plant roots making them a nuisance to the typical homeowner. To successfully get rid of moles, you have to first be sure that they are the problem since a lot of times what you may think are signs of a mole can actually be from a vole. Let’s take a look at how you can identify moles, what they eat, and then most importantly how to get rid of them.

Believe it or not, moles aren’t rodents, they are actually small mammals. They measure between 6″-8″ and have brown/gray fur. They have a long, narrow snout that helps them navigate by touch, their strongest sense. At first glance they look like they don’t have eyes since a lot of time skin covers their eyes. They also have very distinct, paddle like feet that contributes to their superior digging skills.

Moles can dig a shocking 160′ of underground tunnel length in one night. Their skin is uniquely designed to stand upright instead of matted down. This allows them to move backwards in a tunnel if they need to reverse course while digging.

Do You Have Moles in Your Yard

Since moles can be confused with other yard pests, especially voles, look for the following to positively identify a mole.

– Mounded mole hills. Moles make little raised mounds around the holes they construct to get in and out of their tunnels. Voles on the other hand have holes that are not mounded. Instead they lay flat along the ground.

– Holes 6′ apart. Moles usually don’t have holes right next to each other. They are placed 6′ apart or greater. If you see a cluster of holes close together it is probably from another animal.

What Do Moles Eat

Understanding what moles eat is important in understanding why they are in your yard. Unlike voles which feed on plant roots and stems, moles are carnivorous and feed primarily on grubs, worms, and beetles. Most people think voles are a sign that your yard has nuisance insects such as grubs or armyworms, but that might not be the case. They also eat beneficial insects too, especially earthworms.

Generally, a solid approach to control moles is to cut off their food supply. This is easier to do with the nuisance pests such as grubs and armyworms since there are products that target these specific pests. You’re less likely however, to find products that target beneficial pests such as earthworms (however I do have a product recommendation below). That’s why it’s so important to figure out what they are eating in your yard. To do this, take a 1 square foot cross section of your yard, 6” deep, in an area where there are tunnels. Inspect the soil to see what insects you find. You might have to check a couple of areas but you should see some sort of insect or creepy crawly. Then, you can figure out what product is best to control the specific pest that the moles are targeting.

It’s important to point out that the damage they cause to lawns and gardens is not from them eating plant material, rather it’s from the damage they create by digging and traveling through your landscape.

How to Get Rid of Moles

1. Get Rid of Their Food Source– Using an insecticide such as BioAdvanced 24 hour Grub Killer Plus will kill off most of the insects that moles will feed on. If after inspecting your soil you determine that it’s earthworms that the moles are after then apply a carbamate insecticide such as Sevin. This product will be more effective in killing earthworms, and it will also kill the grubs, armyworms and so many other insects and bugs. It’s a product that controls a large number of insects including the beneficial ones so it should only be used as a specialty treatment, not as part of your lawn care plan. In fact, by treating earthworms with this product you are technically going ‘off label’ since most products don’t market killing earthworms even though they are capable of doing so.

2. Use Poison Bait Worms– Arguably the best bait on the market is Talpirid Mole Bait. This bait is worm shaped and usually kills moles in their tunnels. Check out this great video to see how it works and how to bait the tunnels and holes: Talpirid Mole Bait

3. Mole Traps– Plunger style traps like the one by Victor, are another kill option. These traps get set directly on top of active mole tunnels and are a great chemical free option. The spikes are set underground to they are safe around kids and pets.

Combining 2 or all 3 methods above may be necessary if you have a more severe mole infestation.

How to Get Rid of Voles

How to Get Rid of Chipmunks