Believe it or not, it’s most likely the Asian Lady Beetle, not Ladybugs that are trying to enter your home during the fall. 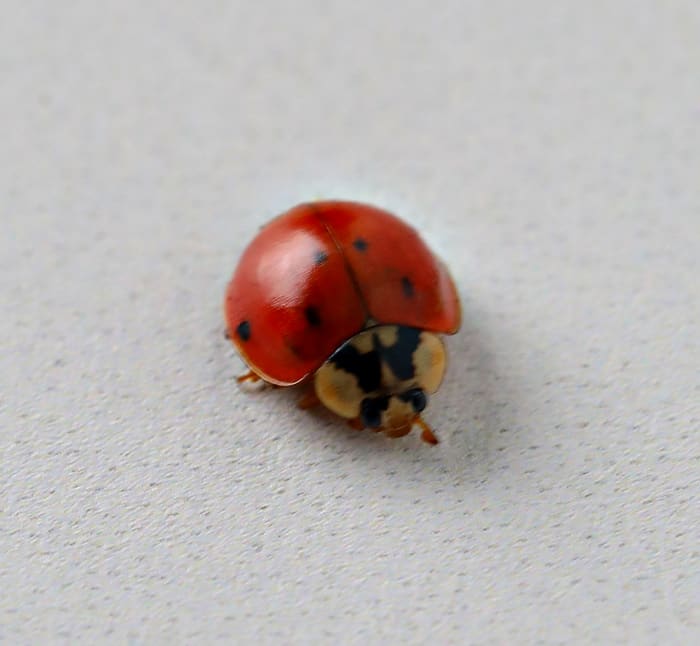 Most people never question the oval shaped insect with a reddish body and black spots they see trying to invade their home in mid to late fall. It’s obviously a Ladybug, right?

The truth is, it’s more likely to be it’s less desirable relative, The Asian Lady Beetle.

The Asian Lady Beetle, originally from Asia, was brought to America in the 1900’s to help provide organic control of aphid populations and other nuisance pests.  Today, they are found throughout the U.S. and as far north as Canada.

Like Ladybugs, The Asian Lady Beetle is generally considered a beneficial insect. However, some people consider them a nuisance since unlike the ladybug, they try to sneak their way inside homes and businesses to overwinter. On a sunny, warm day in mid to late fall, you may see these beetles in large numbers clinging onto your window screens. Chances are a couple, if not several will make their way inside your home through the tiniest spaces. To make things worse, they can release a pheromone that attracts other lady beetles, that’s why it’s common to see so many of them in one place.

It would be hard to consider Asian Lady Beetle’s harmful, especially since they have so many benefits to farmers and gardeners as they provide an organic way to deal with nuisance pests. Also, they don’t damage building structures like some other insects, for example termites or carpenter ants.

The main concern when it comes to Asian Lady Beetles is people simply don’t want them in their homes, which is understandable. Additionally, Asian Lady Beetles can discharge a foul smelling yellow fluid, usually when agitated. This defensive action is called ‘reflex bleeding’ and is meant to prevent predators from eating them. The fluid is hard to clean up and can stain window treatments, and walls.

Usually, Asian Lady Beetles don’t bite and for the most part they avoid human contact. Occasionally, people report bites that lead to a small red bump or skin irritation. Even though a slight skin irritation is usually nothing to worry about, there’s always a small chance an allergic reaction can be triggered by insect bites so seek medical attention if you suspect you are having an adverse reaction to a bite.

There are 3 main ways to tell the difference between Ladybugs and the Asian Lady Beetle: 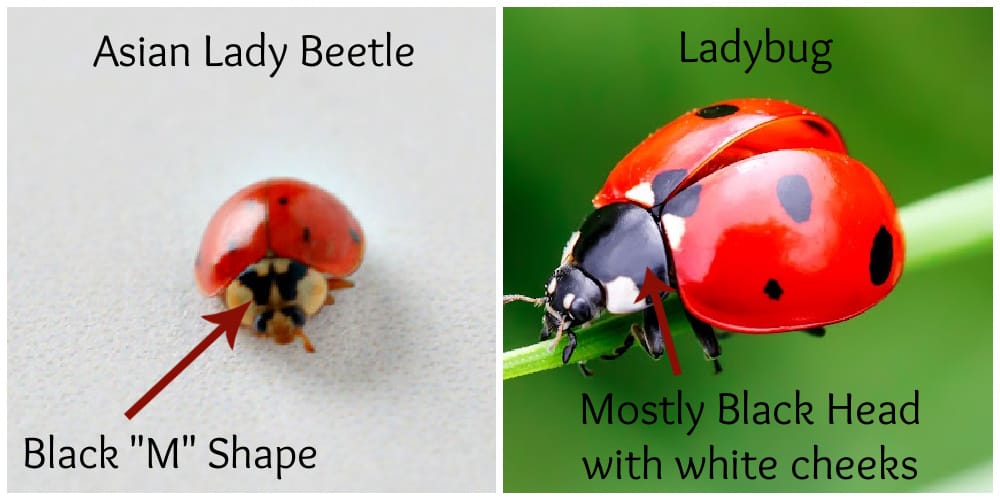 1. The easiest and most reliable way to identify the Asian Lady Beetle is by the black,”M” shape that can be seen on their mostly white head. Ladybugs on the other hand have a mostly black head with white circles on the side that look kind of like cheeks.

2. Ladybugs usually have a brighter red color. Asian Lady Bugs are usually more orange, but they can appear to have a dullish red color.

How to Prevent and Get Rid of Asian Lady Beetles

1. Latch Windows. A lot of people will close their windows but forget to actually latch them shut. Latching your windows shut is the only way to get them really tight. Asian Lady Beetles, as well as other insects don’t need much space to get through. A tight seal is important for preventing entry into your home.

2. Caulk small voids and cracks. Caulk any small openings on the outside of your house. Places to pay extra attention to include the borders of windows and doors, as well as areas where pipe penetrates the exterior. This can be where your spigot comes out as well as gas and oil lines, heating and cooling lines, electric, etc. Use a silicone caulk that is meant for exterior use.

3. Apply a preventative pesticide at the very first sign of the Asian Lady Beetle. Pesticides such as Permethrin, Bifenthrin, or Cyfluthrin are great choices and are usually available in several different products. A great product for an outdoor barrier spray is BioAdvanced Complete Insect Killer. Another easily accessible product for a barrier spray is Ortho Home Defense. These products get sprayed around the barrier of your home as well as around doors, windows, and penetrations.

4. If Asian Lady Beetles are already inside your home, use a vacuum with the hose attachment to suck them up. This will not kill them so you’ll have to empty the bag outside, away from your house. Another trick is to take some pantyhose and have the hose of the vacuum suck it up while holding the open end. Tape the open end around the end of the vacuum hose. This will allow the insects to be caught in the pantyhose and they won’t make their way through the vacuum. If your squeamish about insects being in your vacuum than this is a great trick.

5. Manually remove them with paper or cloth towels. Of course if there aren’t that many beetles in your house you can gently pick them up in a towel and move them outside or flush them down the toilet. Just be very careful when handling these insects because if you squish them or provoke them they can eject a foul smelling yellow fluid as part of their defense.

6. Don’t wait, remove them immediately! Asian Lady Beetles can secrete a pheromone that attracts other lady beetles. The longer you wait to remove them the more likely these pheromones will attract a larger crowd.

How to Get Rid of Chipmunks